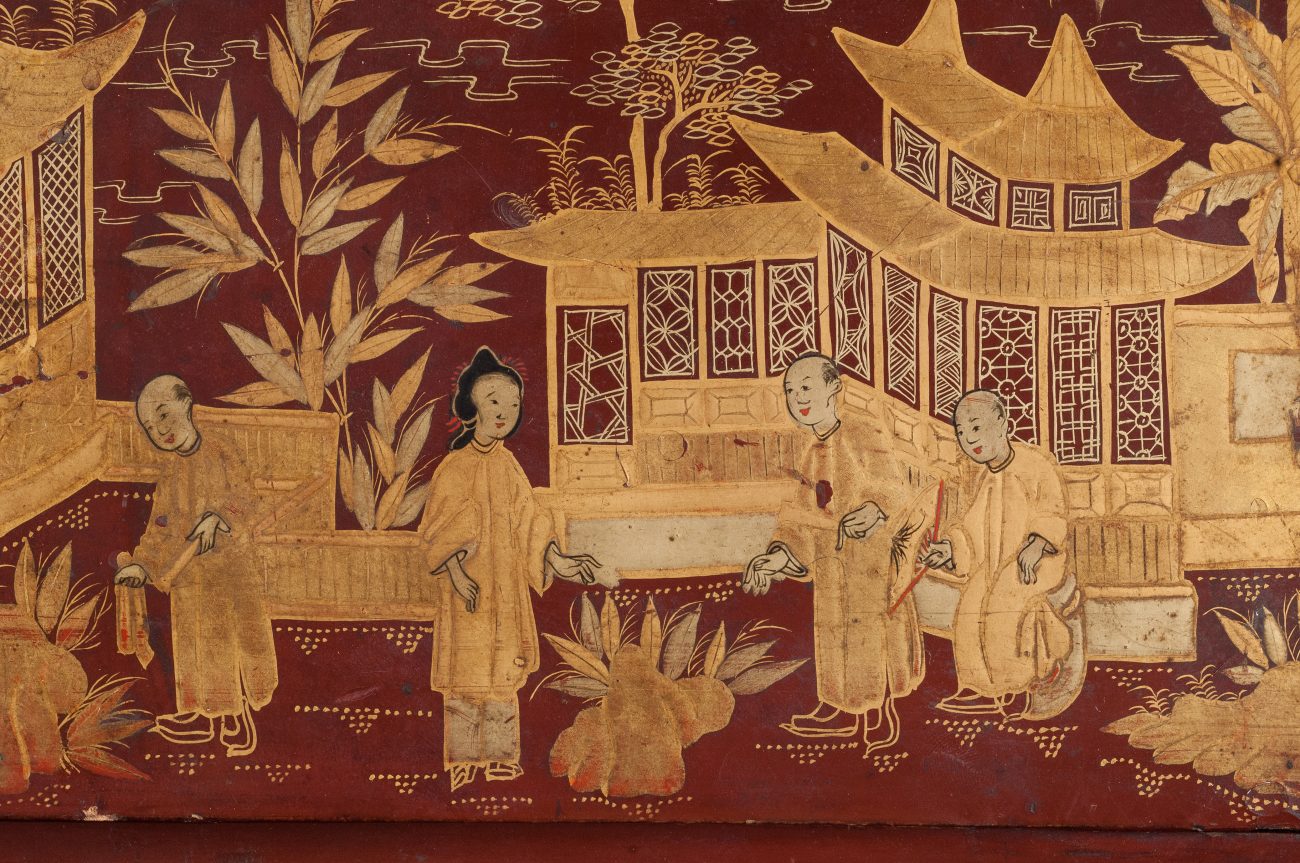 Oriental artefacts have technical peculiarities and the use of such characteristic materials that determine very strict rules of conservation. These objects, extremely delicate and refined in their details, are very sophisticated thanks to the use of precious materials, as metals, fabrics, wood, ceramics and bones, included in the layers of lacquer.
Urushi lacquer is a resin extracted from the exudate of certain trees in Asia, such as Toxicodendron Vernicifluum. Urushi lacquer works are so varied and characterised as to require specific and highly qualified training for professionals. The result is a highly specific field in the conservation of lacquers and oriental artefacts in general, in which study, comparison with professionals in this field in Italy and abroad, and continuous updating is the way Mnemosyne Servizi works. 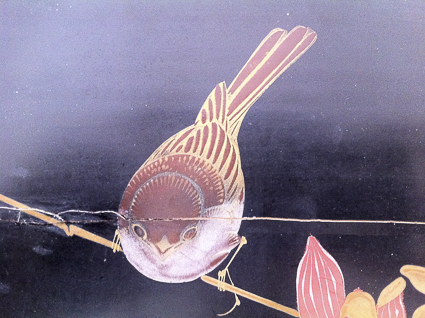 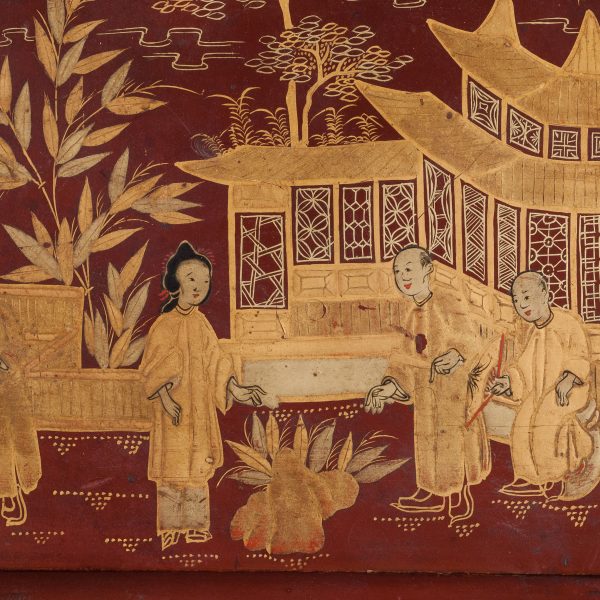 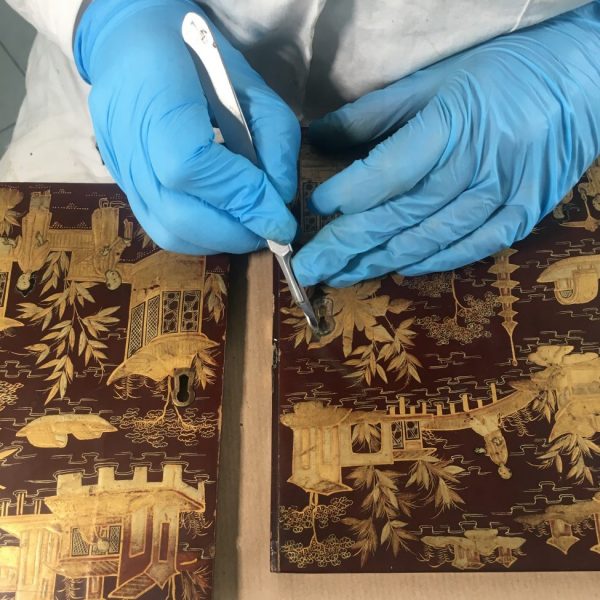 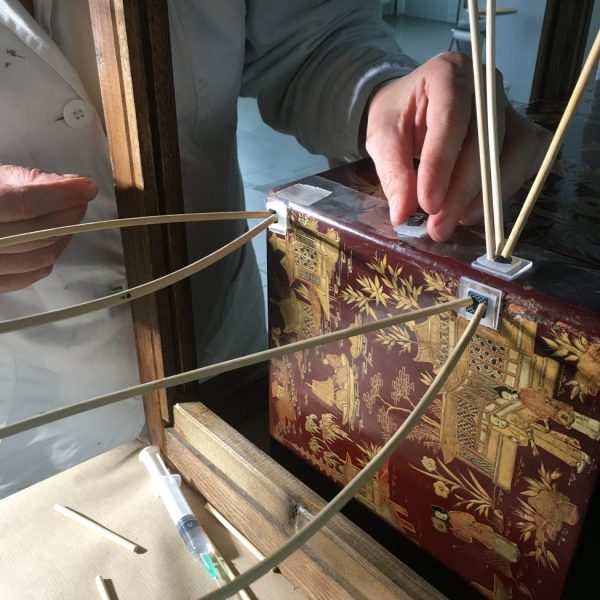 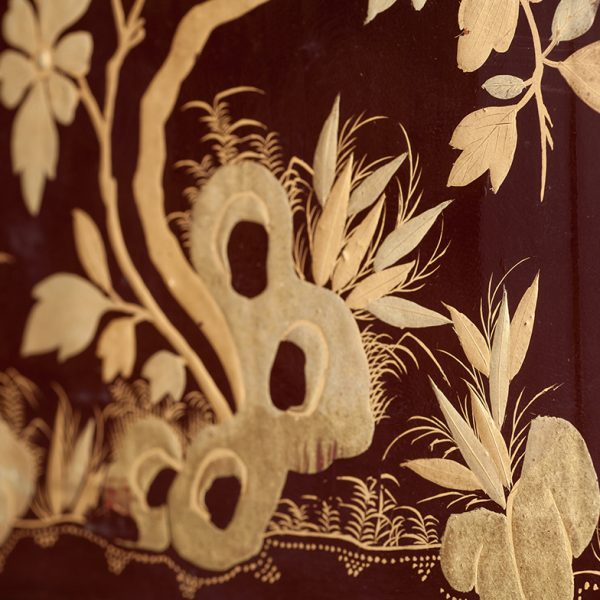 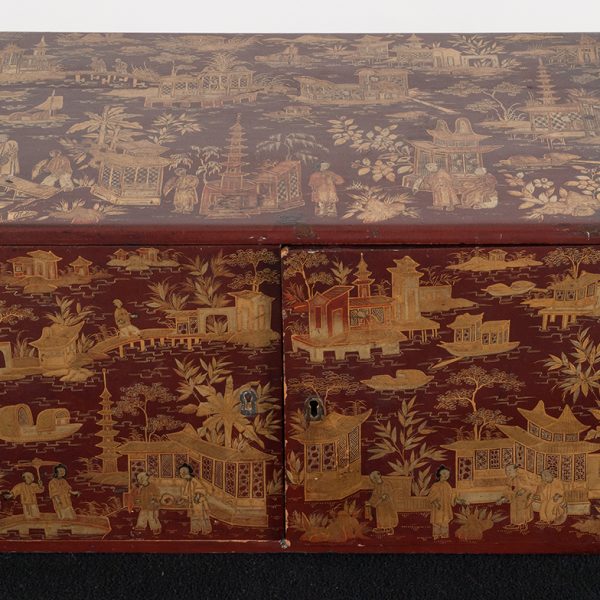 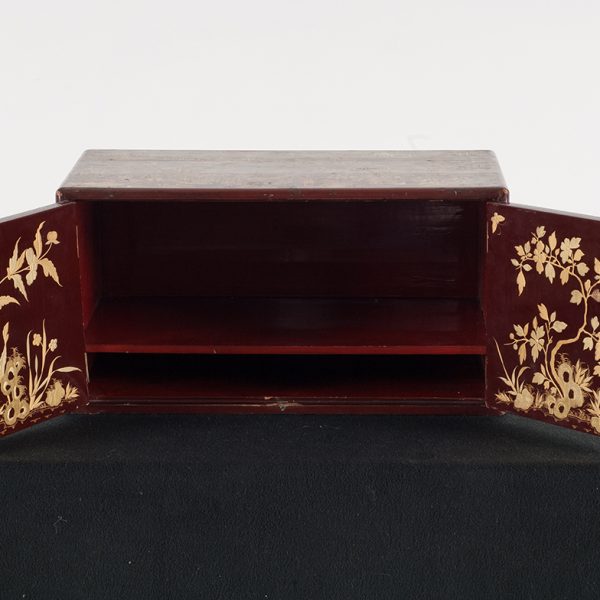 Lacquer, trees and the manufacturing process

Lacquer is a resin that is cold-extracted from the exudate of certain trees called Toxicodendron Vernicifluum or Rhus Verniciflua.

The use of this lacquer to protect objects is an ancient technique: its use has been documented since the time of the Shang Emperor (16th-9th centuries BC) (Webb, 2000) to decorate and protect the surfaces of furniture, columns and armour.

The Urushi lacquer tree belongs to the Anacardiaceae family, genus Rhus, and is cultivated in central and southern China. The peculiarity of trees of the Rhus genus is that they contain urushiol in their resin, the ingredient that triggers the polymerisation process to harden the lacquer.

Other types of lacquer with different properties are also extracted from Rhus Succedanea and Gluta Usitata.

The resin extracted from the trees mentioned requires great caution when applying it, as urushiol is irritating in contact with the skin.

The raw lacquer is transparent, light brown when it comes out as a secretion from the tree, it turns darker on contact with air during the polymerisation process, which takes place in contact with oxygen (Webb, 2000).

The resin is extracted at different times of the year and, depending on the area and time of extraction, the final lacquer will have different properties. In China, trees are only carved once every three years and generally only four times during their lifetime.

The first carving takes place when the trees are between 12 and 13 years old; the first resin (Arami-urushi) is collected in small containers, which are immediately covered to avoid oxidation.

The Arami-urushi is filtered to obtain Ki-urushi (or Kijiomi urushi, as it is called in the Kyoto area), often used alone or with additives such as flours or clays to make the preparatory layers. This raw lacquer contains between 25% and 65% water, which can be totally or partially removed during various subsequent processes.

After further processing (Nayashi and Kurome), a product called Kijiro-urushi is obtained, which contains approximately 3% water.

Many pigments are incompatible with urushi, so the colour range is very limited. The most commonly used colours were cinnabar, black and orpiment.

The most common lacquer products are generally made on a wooden support. A preparation is spread over the top, which can be different in each case, but most often it is clay mixed with urushi. Several layers of lacquer (several dozen layers) are applied and polished over the preparation until a mirror-like surface is obtained.

The edges of the design are made using e-urushi (a mixture of urushi and red iron oxide pigments) on a sheet of Japanese paper, which is then transported onto the object to be decorated. The design is then brushed on with lacquer and then gold dust is applied. The metal powder is then sealed with one or more coats of urushi and then polished.

Taka-maki-e: To create a three-dimensional design.

The edges of the design are made using e-urushi and a relief is created on top using charcoal and tin powder mixed with fresh lacquer. After drying, gold powder is applied. The metal powder is then sealed with one or more layers of urushi and then polished.

Shishiai-togidashi-maki-e: To create a different kind of three-dimensional drawing.

The design and relief are created as in the taka-maki-e technique. Some parts are smoothed using abrasive stones and polished to create an inclination to the relief pattern.

In this technique small silver flakes called Nashiji-ko are sprinkled on the surface of the lacquered object (excluding any drawing). Then the Nashiji lacquer (a transparent amber-yellow colour) is applied and then smoothed so that the metal flakes are visible through the transparent lacquer.

In the raden technique, mother-of-pearl is used for decoration. This can be applied directly into the inlaid substrate or can be embedded in the urushi layers.

This website uses cookies to improve your experience. If you continue to use this site, you agree with it.